“What is the procedure or method used to find the nonce in blockchain technology? Is the created nonce can be repeated from the previous block?”

First, for anyone who may not know, finding the nonce is an essential aspect of the overall blockchain consensus process known as Proof-of-Work (PoW), aka (one type of) blockchain mining, and essentially defines the Proof-of-Work consensus mechanism.

Why Does Consensus Matter?

The consensus mechanism for a given blockchain is an essential part of its structure and operation. The reason consensus is so important is that it literally replaces the functions of confirmation and authorization that prior to the advent of blockchain technologies, have been fulfilled by centralized authorities, such as governments, banks and other types of companies or organizations.

Consensus is essentially “encoded trust”, as described in this overview:

The most widely-used (and original) such consensus mechanism is known as “Proof-of-Work”, or PoW.

All of this by way of background, so that both the procedure and the importance of finding the nonce can be clearly understood.

And so, before we move on – probably helpful to define “the nonce”, as well:

“The “nonce” in a bitcoin block is a 32-bit (4-byte) field whose value is set so that the hash of the block will contain a run of leading zeros. The rest of the fields may not be changed, as they have a defined meaning.

Any change to the block data (such as the nonce) will make the block hash completely different. Since it is believed infeasible to predict which combination of bits will result in the right hash, many different nonce values are tried, and the hash is recomputed for each value until a hash containing the required number of zero bits is found. The number of zero bits required is set by the difficulty. The resulting hash has to be a value less than the current difficulty and so will have to have a certain number of leading zero bits to be less than that. As this iterative calculation requires time and resources, the presentation of the block with the correct nonce value constitutes proof of work.”

Finding the nonce is literally what defines the proof of work (PoW) consensus mechanism.

Here’s a specific description of the overall Proof-of-Work process, including the nonce-related aspects, using the Bitcoin blockchain as an example:

That would defeat its entire purpose as a core component of confirming the integrity of the current block, and, by extension, the previous block and the entire preceding blockchain, per the proof of work description, above.

And yes, this whole process is computationally extensive, intensive, and expensive.

The specific level of difficulty, and, therefore the amount of computing power required, is determined and adjusted by the hashing algorithm itself (SHA-256 in the example given above).

The difficulty for finding the nonce, and gaining a block reward on the Bitcoin blockchain has increased exponentially since the launch of Bitcoin on January 3, 2009.

Early on, a person could mine bitcoins on their own computer – though they could expect to have heating issues.

Then GPUs were implemented, because they could process more calculations, faster — and the difficulty was automatically adjusted upward.

And so, what does the process of finding the nonce look like, these days? 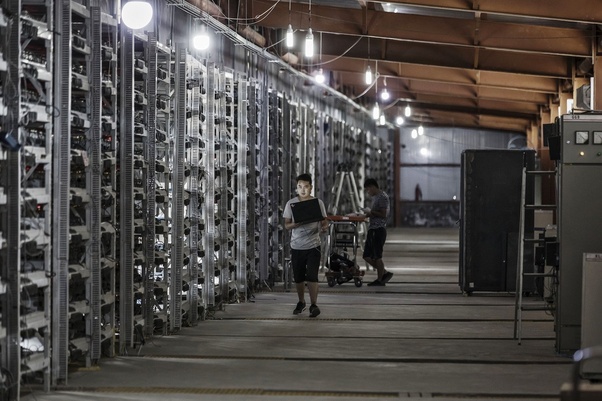